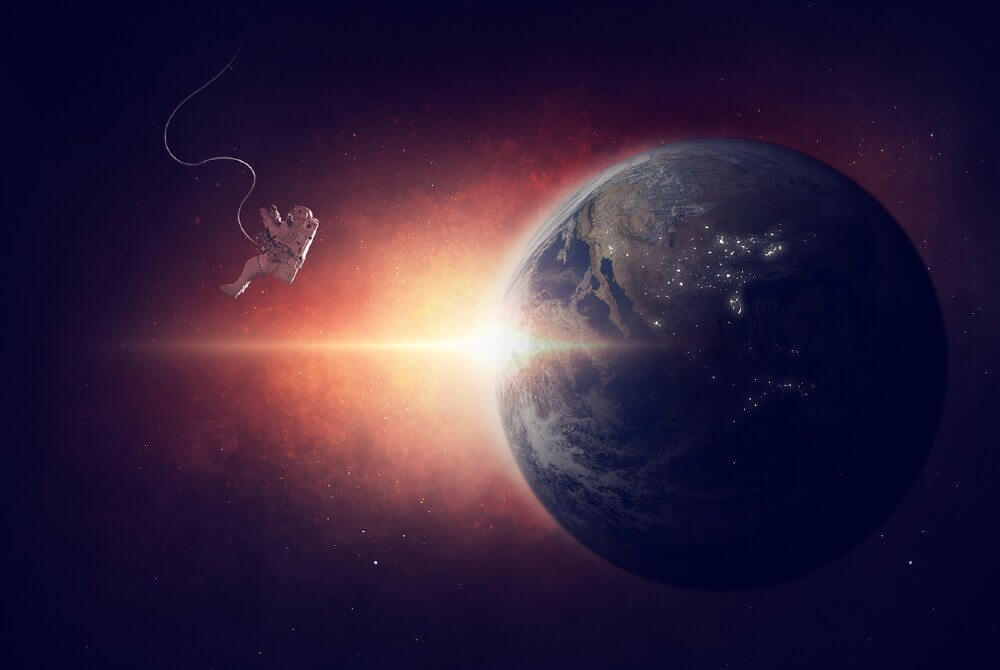 Space exploration has gained traction, causing an advancement in scientific research. The benefits of space exploration are limitless – it can enhance Earth’s safety and spark people’s interest in science.

You may have noticed that astronauts wear space suits and oxygen tanks. And as a curious person, you may have wondered why this is so. Are the suits fancy? Is there no oxygen in space? Why do astronauts need extra oxygen?

Because these questions may have crossed your mind, this article is here to provide answers. Going further, this article establishes that oxygen is unavailable in space and why it is so. You will also find out how astronauts get to carry out activities that generally require the use of oxygen.

Is There Oxygen In Space?

Humans need oxygen to survive. And next to hydrogen and helium, oxygen is the third most common element in the universe. So, it is customary to expect that this life-giving substance is available everywhere for human survival. But unfortunately, there is no oxygen in space. Why?

Generally, there is a higher oxygen concentration in the lower areas of the Earth’s atmosphere; therefore, the higher we go, the thinner the air becomes. Because oxygen is scarce at higher altitudes, mountaineers find it challenging to breathe as they achieve higher heights.

After a certain height, the Earth’s gravity is no longer in effect, and no air molecules are attracted to the Earth, so, at this point, you are in a vacuum. And space is a vacuum.

Furthermore, oxygen atoms do not form molecules in space. Instead, they cling to stardust and do not join together. And humans can only breathe in molecular oxygen.

How Long Can Humans Survive In Space Without Oxygen?

Humans can only last 15 seconds in space before passing out. After 90 seconds without oxygen, asphyxiation and extreme cold sets in, causing freezing and death.

Can You Survive In Space With Only An Oxygen Mask?

Although oxygen is essential for surviving in space, it is not the only requirement. A liquid boils at lower temperatures under low air pressure, and space has low air pressure.

Since the human body is made up of 80% water, stepping out in space with only oxygen causes the blood to boil almost instantly, causing death. In addition, the oxygen in the lungs expands, rupturing the lungs and causing death.

Therefore, humans need to have a spacesuit alongside an oxygen mask when in space. The primary purpose of a spacesuit is to equalize the pressure between the lungs and the surroundings in space, shielding astronauts from the vacuum. Other benefits of a spacesuit include protection from radiation and keeping the body cool.

Space is like a vacuum due to the absence of air. Therefore, it is cold and has low pressure. Furthermore, due to the lack of gravity, being in space makes you feel weightless and afloat.

Space is also silent but not devoid of sound. And although the smell is faint, it smells like a mix of sulfur and gunpowder.

Furthermore, activities like lighting a fire or burning cannot occur due to the lack of oxygen. But, the sun still burns. That is because the sun does not require oxygen to burn; instead, it burns through nuclear fusion.

How Do Rockets Work In Space Without Oxygen?

Airplanes work in the Earth’s atmosphere because fuel and air mix in a combustion process, propelling the plane. However, this process is not the same as rockets. Because space is a vacuum, rockets have to move in the emptiness.

Rockets use either solid or liquid fuel. Solid fuel burns like a candle and astronauts cannot stop or control it till it burns out. On the other hand, liquid fuel can be controlled, allowing the astronaut to regulate a rocket’s speed. But the liquid fuel does not provide as much raw thrust as the solid fuel.

Regardless of the type of fuel used in a rocketship, it still needs oxygen for combustion. Therefore, rockets have an oxidizer that helps burn engine fuel. This oxidizer is the rocket’s oxygen supply and is in liquid form, and it helps speed up the combustion process in space.

The air is made up of 21% oxygen. Consequently, humans inhale approximately 20% oxygen. On Earth, humans breathing in pure oxygen for too long causes toxic results like adult respiratory distress syndrome. And in infants, inhaling 100% oxygen causes retinal problems, affecting the development of their eyes.

However, in space, astronauts breathe in 100% oxygen. Fortunately, because of space’s exceedingly low air pressure, breathing in pure oxygen is not fatal to humans.

Because the human body comprises 3% nitrogen by mass, taking space walks can cause gas bubbles in astronauts’ bodies. Therefore, astronauts need to breathe in pure oxygen to eliminate nitrogen in the body. Otherwise, these gas bubbles result in pain in the body’s bendable joints, including the knees, wrists, shoulders, and elbows.

How Do Astronauts Get Oxygen In Space?

Astronauts take oxygen from Earth when going to space. But what do they do if they run out of oxygen? – they produce it.

Water is the source of oxygen in space since it comprises hydrogen and oxygen. Through electrolysis, astronauts can break a water molecule into its component elements. The electrolytic process involves transferring electric current from an anode to the cathode through water. Consequently, there is enough energy to split the atoms, resulting in hydrogen gas (H2) and oxygen gas (O2).

Astronauts get electricity for the electrolytic process from solar panels, while their water sources include humidity, condensation, and urine. After collecting the water, it is purified to potable standards. Some of the water is then recycled for drinking and some for oxygen production.

The hydrogen gas generated from the electrolytic process doesn’t go to waste. Usually, in the space station, the hydrogen is fed into a Sabatier System. This system combines waste carbon dioxide and hydrogen to form water and methane gas. Then the methane is released into space.

Conclusion: Why Is There No Oxygen In Space?

Oxygen is essential to life, but it is unavailable in space due to its distance from Earth’s gravitational field and inability to form molecules. But this unavailability of oxygen cannot hinder space travel. Therefore, astronauts create their oxygen in space through the electrolytic process.

With technological advancements and more sophisticated instruments, the future of space travel is quite promising. There could be space tourism on a massive scale, and who knows, humans may even be able to relocate permanently to space.