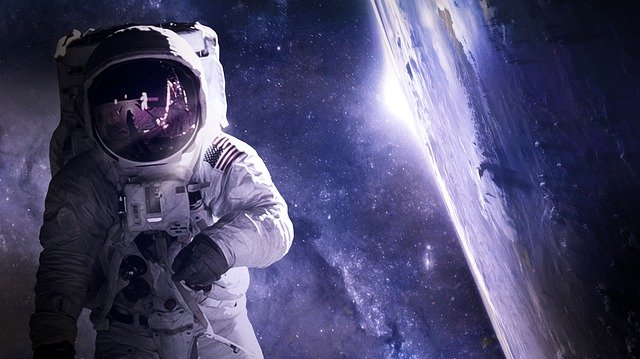 The mission put the first man on the moon. Apollo 11 also caused one of the most debated conspiracy theories to date. If you’ve seen pictures or videos taken from the lunar surface, you may have noticed the strange fact that the sky is entirely black. This is odd since there are 100 thousand million stars in the Milky Way galaxy alone.

You’d think from space, where all the stars are located, they’d be as visible if not more so than they are on Earth. Why are there none visible in these space images? This question has caused many to wonder if stars are viewable from space.

Why Can’t You See Stars From Space?

This mistaken belief can mainly be traced back to the Apollo 11 mission but has multiple contributors. Some instances affect the ability to see the stars, such as a brighter light source or a glare. Without these factors, the stars are even more visible from space than on Earth.

Can Astronauts See Stars on the Moon?

It is hard to miss the starless, pitch-black sky featured in pictures from Apollo 11. Conspiracy theorists argue that the lack of stars is definitive proof that the first moon landing was a hoax. Acknowledging it is bizarre that not one star is visible raises the question, are stars visible from the moon? Or are the conspiracy theorists right? There’s no better way to find out than to hear what the astronauts themselves say.

After returning from the Apollo 11 mission, Neil Armstrong, Buzz Aldrin, and Michael Collins held a press conference. A reporter asked them the very question: could they see stars from the lunar surface?

Neil Armstrong answered, stating: “We were never able to see stars on the lunar surface or on the daylight side of the moon without looking through the optics.”

Later, Armstrong clarified that in the shadow of the Lunar Module (The Eagle) the men could see some brighter stars. On the dark side of the moon, stars were also visible. So the first man on the moon himself confirmed that you are able to see stars on the moon, but not on the daylight side. But why is this?

Why Can’t You See Stars in Space Images?

Many find it rare to see visible stars in pictures taken from space. You aren’t alone if you find that unusual. A few photography-based explanations can clarify why this is. If you’re familiar with photography, you might already know. It turns out that the reasons stars are absent affect astrophotographers and iPhone-camera users alike.

In photography terms, exposure describes the amount of light that reaches the film or sensor of a camera. Exposure determines how much light is in the photo or how bright a picture appears. The camera’s shutter speed is what controls the exposure. If you used a long shutter speed during the day, the image would turn out completely white. If you did the opposite and used a fast shutter speed at night, the photo would be completely black.

Pictures taken from space frequently have a purpose other than capturing the stars. Since the photo’s subject isn’t the stars, the exposure isn’t set correctly for the light from any stars to imprint on the camera’s film. It’s set to capture an astronaut, satellite, or other subjects that are generally brighter than distant stars.

Cameras also like to focus on the brightest point of an image. Have you ever tried to take a photo in front of a bright window? If so, you’ve seen how the light washes the rest of the image out until it gets refocused. The same occurs in space. The difference is the bright point is usually the intended subject, so there’s no need to refocus on it. In these instances, the stars are not bright enough compared to the subject of the photo for the camera to focus on.

Can Astronauts See Stars From Space?

Astronauts stationed on the ISS have confirmed that they can see stars in space. Luckily, many pictures have been taken using the proper settings to photograph stars. These pictures offer an idea of what astronauts see all the time. They can see millions of stars and have the best stargazing anyone has ever experienced. One could assume pictures don’t do the view justice.

There are a few instances where astronauts may not be able to see stars in space, even though they are there. The ISS has interior lighting. When driving a car at night, any interior lights reflect on the passenger windows, altering what you’re able to see outside. On the ISS, astronauts deal with the same thing affecting their ability to view the stars outside.

Astronauts also have the sunlight or glare from the sun’s reflection washing out the pin-point stars. Just like how on Earth we can’t see the stars in the sunlight, this effect occurs in space as well. Although the sky does not turn blue in space due to the sun, it does dim the star’s light, effectively canceling it out to the eye.

The majority of us will never be lucky enough to experience the stars firsthand from space. It may be surprising to discover that the stars look very much the same as they do on Earth. Whether viewed from Earth or orbit, the stars appear as small points of light against a black backdrop. Although they do look similar, there are some differences.

Now knowing that the stars are visible, it may not be surprising that they’re much brighter and have more clarity. With no atmosphere, clouds, or pollution of any kind diluting their light, millions of stars are visible to the naked eye. With significantly increased brilliance paired with an unaltered view, it would be the stargazing of a lifetime.

While looking at the stars, have you ever noticed how they seem to twinkle? As the light from stars passes through Earth’s atmosphere, the light gets bounced through the different layers. The varying temperatures of the air distort and bend the light before it reaches your eyes, giving the stars their twinkling effect. If you were to view stars from space, they would be completely still with no twinkle.