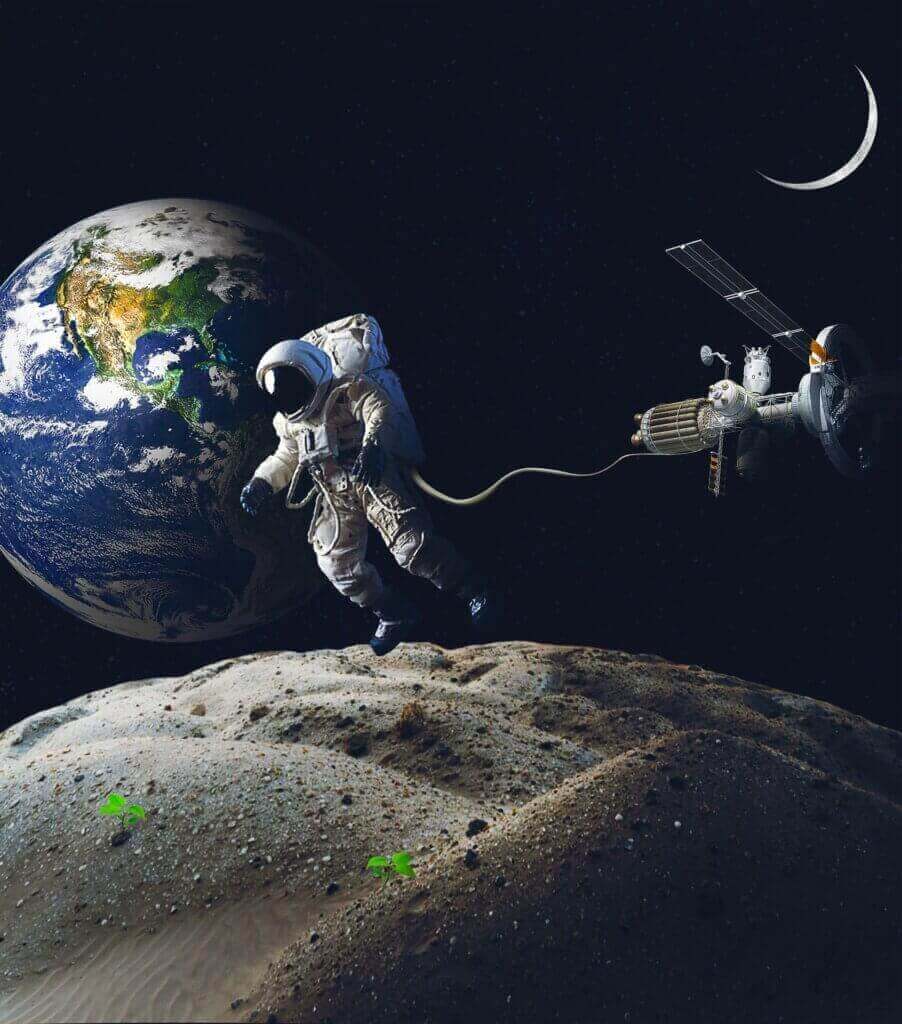 In many ways, traveling from the Earth to the moon is quite similar to going from any point A to point B on planet Earth. There are different routes one can take that determine the time it takes to get to the destination.

There are, of course, a few other factors. So, if you are looking for a simple answer to the question, “how long does it take to get to the moon?” it takes about an average of 3 total days!

The moon is about 285,855 miles away from the Earth according to NASA. But that is the average distance since both the Earth and its natural satellite are in motion.

So, the distance actually varies depending on whether the moon is at its closest point to the Earth called the perigee or the farthest point called the apogee. That’s because the moon’s orbit around the earth is not a circle.

We also know that this distance has an impact on the tides of our oceans and also dictates eclipses that we all get quite excited to see from time to time.

Now, in terms of going to the moon, humans have set course to the moon many times at different points in history. And depending on the parameters of the mission, the time has varied quite a bit. Let’s take a look.

The Moon at Perigee

This is the moon at its closest point to our planet and the distance is roughly 226,000 miles from the Earth. If we are in a full moon phase and it happens to coincide with the perigee, it is referred to as a supermoon. This term was coined by skywatchers when they can see the full moon at 90 percent of the perigee.

A supermoon is usually 17 percent bigger and 30 percent brighter when compared to the first phase of the moon which is called the waxing crescent. The ocean tides are impacted because the gravity of this satellite has a pulling effect on our oceans. This leads to a tide that is higher than usual.

The Moon at Apogee

The apogee is when the moon is at its farthest point from the Earth. At this point, it is roughly 251,000 miles away from the Earth and when the visual is at its clearest it is called the ring of fire solar eclipse.

And since the sun actually has a diameter that is 400 times more than the moon, both their disks will match close to perfection during a solar eclipse. This means the sun will achieve a totality when peeking from behind the moon.

But if the solar eclipse coincides with the moon’s apogee, the distance between the moon and the Earth will be greater and the moon’s disk will be a lot smaller when seen from the Earth.

As a result, the sun won’t actually be blocked completely which means we will be able to see an outline of the sun from behind the moon. Still pretty cool, isn’t it?

How Long Does It Take To Get to the Moon?

So far, there have been several manned and unmanned missions to the moon. The US had its Apollo missions which sent 9 different crews to the moon. These missions were made possible due to the incredible research and efforts done in the 1950s and 60s which led to six spaceships actually landing on the surface of the moon. But there was a lot more done before man walked on the moon.

There are several unmanned missions that were launched with their own agenda to reach the moon. Let’s take a look.

This is the first and also the fastest unmanned mission to the moon. It was basic and did a flyby in 1959. It was launched in January and went quite close to the lunar surface before returning. This probe took just about 36 hours to finish the trip.

Though it usually doesn’t take this long, SMART-1 was one of the most sophisticated technological space missions to the moon. It also has the distinction of being the slowest and by extension, the longest mission to our planet’s only natural satellite.

But SMART-1 was the most fuel-efficient lunar probe so far. It made use of just about 180 pounds of xenon propellant for the complete mission which came to an end in 2006.

This probe that was launched in September 2003 had an ion engine that propelled the spaceship to the moon. It left the Earth in a slow spiral and reached the moon after 1 year, 1 month and 2 weeks landing in November 2004.

This one was launched by China from the Xichang Satellite Launch Center in October 2007. It was launched on 24 October but stayed in the Earth’s orbit till 31 October. Then it headed towards the moon and reached its orbit on 5 November. So, it took five days for the spaceship to reach the lunar orbit by using rocket boosters.

The next one from China was launched three years later in October 2010. This one took 4 days, 16 hours to reach the moon’s orbit.

But putting a man on the moon was a whole other deal. A race between the US and the Soviet Union to be the first one to do so was a highly motivating factor in getting the job done. And it was quite the challenge too.

The Apollo missions were the ones that finally landed a human on the moon. There were six of them and it was done with the help of three-staged Saturn V rockets. These rockets were used to boost the astronauts into space. At each stage, the rockets were dropped back into the Earth’s oceans as they emptied the fuel in them.

This was the first ever manned mission to the moon that landed on the lunar surface. It happened on July 20, 1969 at a region called the Sea of Tranquility. The mission had Commander Neil Armstrong and pilots Buzz Aldrin and Michael Collins on board. They took pictures, collected rock samples, did some experiments for 21 hours, 36 minutes and headed back home.

The second one had Commander Charles Conrad and pilots Alan Bean and Richard Gordon on board. They landed in an area called Oceanus Procellarum on November 19, 1969 and stayed there for 31 hours, 31 minutes before taking off.

On board this third manned mission were Commander Alan Shepard and pilots Edgar Mitchell and Stuart Roosa. They landed on February 5, 1971 and spent 33 hours, 31 minutes conducting experiments, taking pictures and collecting rock samples.

The fourth manned mission to the moon landed in Mare Imbrium on July 30, 1971 with Commander David Scott and pilots James Irvin and Alfred Worden. They stayed on the moon for 66 hours, 55 minutes and were also the first ones to use a lunar rover.

Then there was Apollo 16 which had Commander John Young and pilots Charles Duke and Thomas Mattingly. They landed in the Descartes region on April 21, 1972 and stayed there for 71 hours, 21 minutes. These astronauts also used the lunar rover and covered a vast area on the moon.

And finally, there was Apollo 17 which was the last manned moon mission. It was commandeered by Eugene Cernan and was piloted by Harrison Schmitt and Ronald Evans. They landed in Taurus Littrow on December 11, 1972 and stayed there for 75 hours before returning home.

These missions were made possible by seemingly endless calculations done on Earth before the actual journey. The calculations are tricky since they are to include the movement of both the celestial objects. Mistakes could have spun the astronauts into infinite space, a lot of which is still unexplored.

It took the astronauts about three days to get used to the moon’s orbit. They had to slow down and let the moon’s orbit and its gravity take them before they could carefully land on the surface.

So, each of these missions actually spent a day in the moon’s orbit preparing for their landing on the surface. However, once they were ready, the final descent was only a matter of hours before touchdown.

In terms of distance, the travel time is only three days but depending on the agenda of the mission, the astronauts have taken 4-5 days to land on the lunar surface.

The Journey: Slowest and Fastest Trips

As mentioned earlier, the SMART-1 probe launched by the European Space Agency in 2003 is the slowest of all moon missions. But that pace was intentional as they were trying to save fuel. It took SMART-1 1 year, 1 month and 2 weeks to land on the moon after its initial lift off from the Earth.

It stayed on course for the mission for a  couple of years before it crashed into the moon on purpose.

The fastest mission to the moon was launched by NASA in 2006. It was called the New Horizons probe which aimed to visit the ends of our solar system, beyond the Kuiper Belt as it successfully did going past Pluto. It did not make a stop at the moon but it did use its surface to launch the spaceship further into space.

The New Horizons probe took about 8 hours, 35 minutes to reach the surface of the moon.

What about Getting Back to Earth?

Now, it’s not enough to make it to the moon, is it? At least the manned missions have to come back with the astronauts safe and sound. This is done using thrusters on the module. The astronauts of the Apollo missions achieved this to make it back to their Command and Service module.

As a result, they did not need to orbit our planet before landing back on Earth. Instead, they would fly into our atmosphere and zoom into the ocean. This is a lot more direct than the trip towards the moon and hence it took only three days for the astronauts to come back.

In comparison, the journey to Mars takes about 7.5 months from the Earth. Several countries have managed to send unmanned missions to the red planet, some even taking a rover and helicopter along. The NASA mission in 2020 was the latest one.

When you travel on Earth from one place to another, you need to take factors like traffic into account. In the same way, there are a few other factors to consider when space agencies plan a trip to the moon.

The trajectory of the spaceship is one of those factors. They also have to consider factors like:

So, to answer your original question, “how long does it take to get to the moon?” it would take an average of 3 days for a manned spacecraft. If the New Horizons probe was at its full speed which is 36,400 miles per hour and the moon was at its closest point, it would have taken the probe about 6 hours, 15 minutes to land on the lunar surface.

But if the moon was at its farthest point, it would’ve still taken the probe only 6 hours, 50 minutes to pass by.