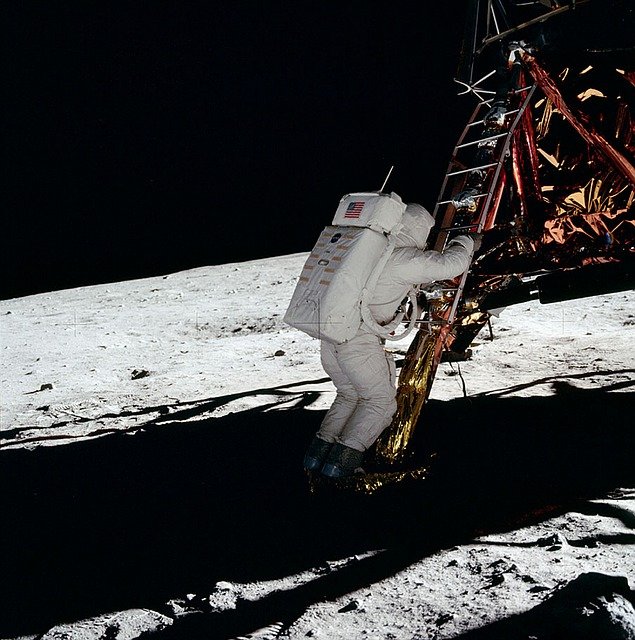 If you’re in your 50s or 60s, you might remember the first moon landing. As Neil Armstrong stepped out onto the lunar surface, he famously uttered the words, “That’s one small step for man, one giant leap for mankind.”

The date was July 20, 1969, and the world watched with bated breath as humankind finally conquered the moon. Buzz Aldrin and Armstrong planted the flag on the surface and returned home as heroes.

The Apollo space program lasted through nine space missions to the moon, with 12 NASA astronauts being the only humans ever to set foot on its surface.

Who Landed On The Moon?

So, who were the lucky individuals that managed to land on the moon and go for a walk? Here are the names of the 12 astronauts.

Early Attempts to Reach the Moon

In 1961, the then Soviet Union sent Yuri Gagarin into space. He was the first man to orbit the earth, sparking the start of the international space race between the USSR and the United States.

Not to be outdone by the Russians, then President, John F. Kennedy, announced that the US would send a man to the moon by the end of the decade.

The Apollo program, also known as “Project Apollo,” was the third space program executed by the United States. The maiden flight occurred on October 27, 1961, and its final flight on December 19, 1972.

The Apollo Project started with a series of uncrewed space flight orbiting earth. It wasn’t until Apollo 7 that NASA began to using crews on the Apollo missions. Apollo 7 was the first crewed flight to orbit the earth, managing 163 rotations while testing new equipment.

Apollo 8 became the first flight to complete a lunar orbit and return to earth. The three-person crew consisted of Frank Borman, William Anders, and Jim Lovell, with the flight occurring between December 21 to December 27, 1968.

The crew didn’t land on the moon. However, they were followed by Apollo 10 in May 1969, in a rehearsal for the coming lunar landing.

Apollo 11 was the first lunar mission to land on the moon’s surface. Neil Armstrong and Buzz Aldrin’s crew became the first human beings to set foot on earth’s natural satellite. Michael Collins stayed in the Command Module during the lunar walk, orbiting the moon as Aldrin and Armstrong enjoyed the experience.

The Apollo 13 flight occurred between April 11 to April 17, 1970. This mission went sour after an oxygen tank exploded two days into the task. As a result, the crew ended up orbiting the moon with limited oxygen, food, and supplies. It was a scary moment for the United States, and the world watched in awe.

The astronauts spent days in orbit around the moon but never landed. The crew members— Fred Haise, Jim Lovell, and Jack Swigert, ended up using the lunar module as a makeshift “lifeboat.” Thankfully, all three astronauts made it home.

After the hair-raising events of Apollo 13, the Apollo 14 mission was a walk in the park in comparison. Alan Shepard became the fifth US astronaut to walk on the moon, and he famously knocked a few golf balls around, putting them on the lunar surface.

Edgar Mitchell was Shepard’s crew member joining him on the moon, becoming the 6th person to set foot on the lunar surface. Stuart A. Roosa manned the Command Module as it orbited the moon.

During the Apollo 15 mission held between July 26 to August 7, 1971, astronauts James B. Irwin and David Scott stayed o the moon’s surface for nearly three days. The pair were also the first to use the lunar rover.

John W. Young previously went to the moon during the Apollo 10 mission, but he never got the opportunity to walk on the lunar surface.

From April 16 to 27th, 1972, He realized his dream on the Apollo 16 mission with Charles M. Duke, Jr. The pair walked on the moon while Thomas K. Mattingly manned the Lunar Command Module.

As the Apollo program’s final flight, Harrison Schmitt and Eugene Cernan became the last two astronauts to walk on the lunar surface. The mission took place between December 7 to 19th, 1972, with the pair walking on the moon for over 22-hours.

The team collected more than 249lbs of moon rocks and other lunar material before returning home. Ron Evans manned the Command Module, becoming the 24th man to reach the Moon.

As the public’s interest in the Apollo programs started to wave in the early 70s, the US government decided to end the program and divert funding to other programs.

Since the end of the Apollo program, no other astronauts from any country managed to reach the lunar surface. NASA changed its strategy in the 1970s, moving to smaller programs. The organization also started introducing diversity programs in the coming years.

How Many People Landed on the Moon? FAQ

Q: Did the Russians get to the moon first?

A: The Soviet Union launched its Luna 1 probe on January 2, 1959. The probe flew within 4,000-miles of the lunar surface, with the trip lasting 34-hours. Unfortunately, the probe was too fast entering the moon’s orbit, and it still circles the moon today.

Q: What was the first crewed mission to the moon?

A: Apollo 11 landed on the moon on July 20, 1969. The flight lasted four days, six hours, and 45 minutes, with three astronauts crewing the mission. It might surprise you to learn that Apollo 11 holds the record for the fastest spacecraft, clocking 24,791 miles per hour.

Q: Who was the last US astronaut to land on the moon?

A: The last two astronauts to land on the moon were Harrison Schmitt and Eugene Cernan. The pair landed in the “Taurus-Littrow Valley” on December 11, 1972, departing on December 14. The team was the first to drive the Lunar Rover, using it to collect rock samples over their 22-hour stay on the surface.