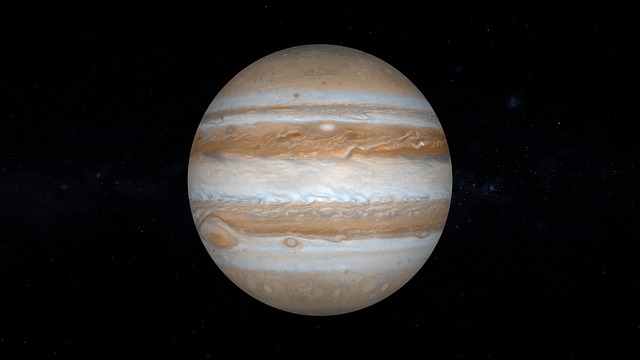 All planets vary in their color because of the material they are made of and the ability of their atmospheres and surfaces to absorb and reflect sunlight. While Mercury has a dark grey color due to its rocky and dusty surface, Venus has a light yellow color due to an atmosphere made of carbon dioxide along with clouds of sulphuric acid. All the planets in our solar system have distinct colors which come from their distinct features.

The iconic pictures of Jupiter provided by NASA show us that Jupiter’s color changes from different shades of white to red, orange, brown, and yellow. This is because Jupiter does not have a surface since it is made up of gases. The planet has an active atmosphere, mainly the winds and the storms, giving the planet its color. The chemical elements in the planet’s atmosphere interact with each other and the sunlight to give Jupiter its characteristic colors.

With multiple chemicals in its atmosphere, Jupiter shows different colors when viewed from a telescope since every chemical creates a distinct shade when they reflect sunlight. If viewed from an unaided eye, the color of the planet seems to be white. The main gases present in the planet’s atmosphere are helium and hydrogen. 90% of Jupiter’s atmosphere consists of hydrogen. The clouds are known to comprise ammonia crystals, and ammonium hydrosulfide, along with water, ice, and methane.

The planet’s storms bring chemicals previously placed at the planet’s core to the clouds. These chemicals include sulfur, phosphorus, and hydrocarbons and are known to form the red, whiter, and brown spots that the astronomers observe on the Jovian Atmosphere. The white spots on the planet result due to the presence of ammonium crystals. Astrologers also state that white spots depict cool storms, brown depicts warm storms, and red spots depict hot storms.

The atmosphere of Jupiter is being studied by astronomers using the colors the planet shows. In order to get an in-depth knowledge of the planet’s atmosphere and its workings, a few missions have also been scheduled. These missions will also study the interaction between volcanoes and water ice on Io and Europa.

What is Jupiter’s False Color?

Jupiter’s atmosphere is predicted through the colors the planet shows. NASA released an image of the giant Jupiter ball, which created a spark among people if whether the true color of the planet is blue or not. To their surprise, the astronomers claimed that the color of the planet was not blue. The released image was blue as the astronomers had processed the image to find out details about Jupiter’s surface. But the planet’s true color is still considered to be white, red, and brown.

What Are The Stripes of Color On Jupiter?

The stripes that can be seen on Jupiter are called bands. These weather bands parallel the planet’s equator, which gives the planet its color. These bands also keep changing and moving, which is why the color of the planet also changes frequently.

The colors of both bands differ because of their chemical composition and temperatures. Neighboring bands are known to have winds moving in the opposite direction.

What Is The Great Red Spot On Jupiter?

The great red spot on Jupiter’s surface is an example of an enormous storm first observed 400 years ago and is still spinning in the planet’s atmosphere. This storm was first discovered in the 1600s by Giovanni Cassini but was observed closely by NASA in 1974 using their Pioneer 10 Spacecraft. The storm is so large that it can be observed from the Earth’s surface using any telescope. The start date of the storm is unknown to the world.

It was observed that this storm is a lot larger than a hurricane that takes place on the surface of Earth since the spot itself is two times the size of the Earth. The last time the spot was measured, it had a radius of 40,000km, but it is known that the size of the red spot has been decreasing ever since, and it has shrunk to almost half of its size. The speed of winds inside this storm is approximately as high as 270 miles per hour.

Recently, a storm developed on Jupiter’s surface caught the attention of astronomers. This storm has the same characteristic color as the Great Red Spot and has a diameter almost half the diameter of the Red Spot. This is why the newly discovered storm has been named Red Junior. Even though the storm appeared in 2000 with 3 small spots, these spots merged to form the Red Junior. Scientists also assume that the method of formation of the Great Red Spot would be similar to that of Red Junior.

Four spacecraft have visited Jupiter to date, but none of them has been able to land on the planet’s surface since it is made up of gases. But astronomers learned about Jupiter because of the four successful missions. The first mission to Jupiter took place on 20 August 1977 in Voyager 2. This spacecraft is the only one able to study the four largest planets of the solar system so closely.

The next mission to the planet took place on 5 September 1977 in Voyager 1. This spacecraft was able to fly successfully by Jupiter and Saturn, followed by the farthest planets in our solar system. On 24 April 1990, the Hubble Space Telescope was used to view stars, planets, and galaxies for accurate analysis.

The last mission to Jupiter took place on 5 August 2011, during which Juno claimed the planet to be a giant, complex planet with storms and cyclones and an extremely strong magnetic field. These visits have helped the astronomers closely study and understand the atmosphere of the planet, which gives the planet its colors. s