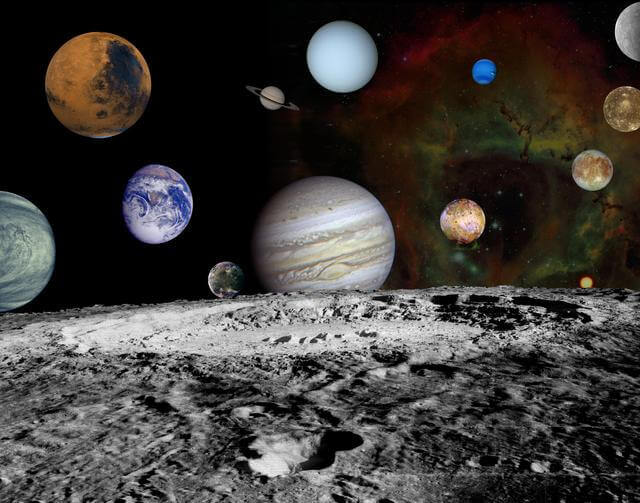 Our solar system consists of many celestial bodies, including spherical planets and a large number of natural satellites. Natural satellites, also known as moons, come in many sizes, shapes, and types. They are a lot more than rock balls circling the planets. Moons are generally believed to be formed by the leftover dust and gas during a planet’s formation.

Moons of the Outer Planets

Jupiter, Uranus, Saturn, and Neptune are the planets that orbit in the outer part of the solar system. These planets have more moons as compared to the inner planets. The main reason behind this is that the outer region of the solar system is colder due to which water, instead of becoming steam, freezes to ice. This promotes the accretion of ice and the leftover material from the surrounding disk of their planets.

How many moons does Jupiter have? Well, the menagerie of Jupiter consists of the largest moons, also called Galilean Moons, of the solar system, including Ganymede, Europa, Calisto, and Io. It also consists of moons with elliptical orbits and moons that orbit in the opposite direction of their planets. Jupiter has 79 moons, out of which 53 have names, while the others are still awaiting their official names.

How many moons does Saturn have? Saturn has 82 moons, which makes it the planet with the largest number of moons. Out of 82 moons, 53 have names, while 29 are still awaiting their official names. The two moons studied the most from Saturn are Titan and Enceladus.

Uranus has 27 moons, including Ariel, Cordelia, and Juliet. All the moons present in Uranus are named to pay homage to the plays, poems, and characters of William Shakespeare and Alexander Pope. Unlike any other moon, Miranda has eight small satellites, which results in overcrowding and increased chances of collision. The five largest moons of Uranus include Oberon, Titania, Umbriel, Ariel, and Miranda.

Neptune has 14 moons, including Despina, Galatea, and Neso. The largest and the most famous Neptune moon is Triton which is currently the coolest object in the solar system with its atmosphere made of nitrogen and methane. It is also volcanically active and contains more rock than Saturn and Uranus.

Moons of the Inner Space

The inner planet moons are natural satellites with circular orbits. The inner strengths and friction of these moons protect them against tidal forces. Inner planets are also known to have lesser moons than outer planets mainly because of the gravitational forces of the Sun.

Mercury and Venus are two planets that do not have any moons due to their small size and proximity to the Sun. Any moon orbiting these two planets would collide with the planet and be destroyed due to strong gravitational forces.

Earth is the first inner solar system planet with a natural satellite, also the fifth-largest in the solar system. This is the first moon that was discovered, thus its name. It is at a distance of about 240,000 miles from the Earth. Due to impacts from asteroids and comets, the moon’s surface is cratered. This moon was formed due to an impact from another planet, which also impacted Earth’s gravitational field. The presence of the moon helps in moderating the climate of Earth.

The moons of Mars: Phobos, and Deimos were discovered by Asaph Hall in 1877 and their names can be linked to Roman mythology. Mars’ moons are the smallest in the solar system. These moons can also be used as base moons to launch robots and observe the Red planet. The composition of both moons shows us that these are possible asteroids that have been captured.

While determining the exact number of moons is not possible, it is known that each planet has anywhere between zero and hundreds of moons. These moons are mysterious but interesting structures with different atmospheres, sizes, shapes, and structures that orbit around their host planet. Astronomers have conducted and are planning missions on different moons to discover if they are suitable for life or not.