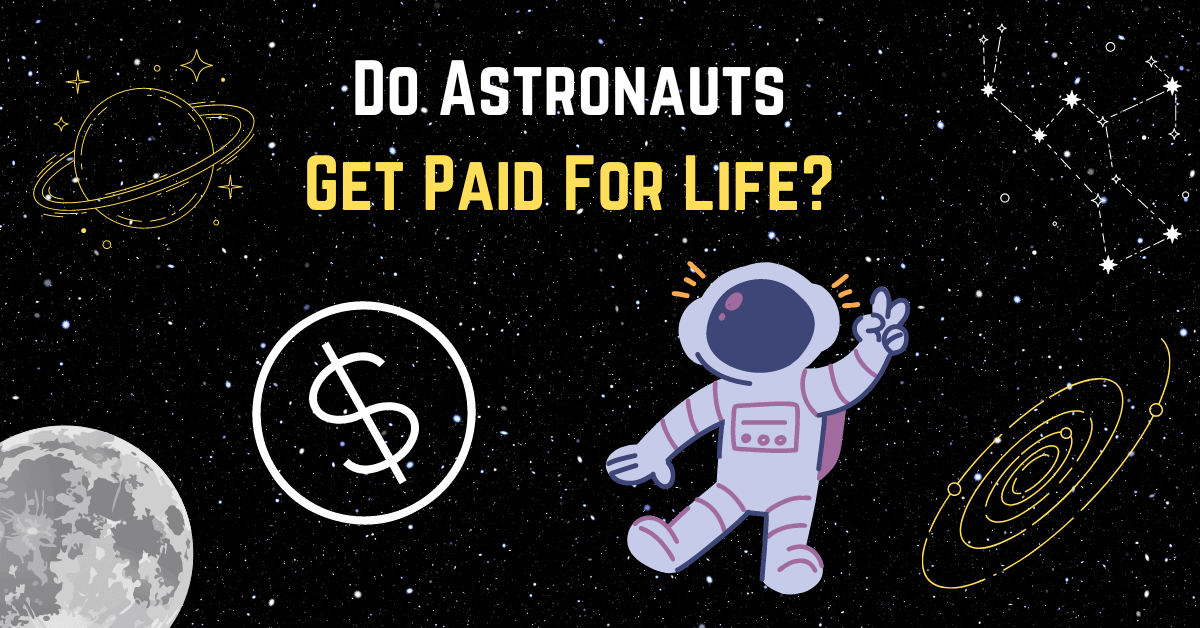 Do astronauts get paid for life? Well, no. But that’s not such a bad thing, and we’ll tell you why. It might be your dream to be an astronaut, but there’s absolutely nothing wrong with wondering what the pay is like. After all, it’s a job.

When it comes to astronauts, though, it’s not like there is a generic ballpark that changes from one company to another based on their beliefs and work culture.

Contents hide
1. What Is The Pay Like For Astronauts?
1.1. Military Salary
1.2. Civilian Salary
2. Was It Always Like This?
2.1. Apollo 11 Salaries
3. Public Private Comparisons Today
4. Conclusion

Space exploration is largely a government area which is why Elon Musk’s SpaceX was such a huge breakthrough. Privatizing space wasn’t something people gave a lot of thought to pretty much till the moment it actually happened.

Even so, the salary of an astronaut depends on more than a few factors. The astronaut’s rank and level of experience are important factors. But in space exploration, as it is today, there are more than a few options. So, now you also have to look at the agency the astronaut will work for.

Regardless, you can safely assume that astronauts get paid quite well worldwide. Apart from benefits like retirement plans, healthcare, and housing, they do make an average of $100,000 a year, if not more.

If you think that’s quite a bit, remember the fact that it’s one of the riskiest jobs in the world, and there is no such thing as a small problem in space.

And, of course, if the astronaut is working for a private entity like SpaceX, they are going to make more money than that. So, while they don’t get paid for life, they do get paid quite a bit while they’re still working.

If you haven’t thought of astronauts as civilian and military, you might not be the only one because a lot of people don’t make that distinction. Nevertheless, it exists, and that reflects in their salaries too.

There are plenty of military astronauts all over the world. Now, as you might have guessed, they also need the same level of qualifications and training as civilian astronauts. They might even need some more training. Their salaries, unsurprisingly, are decided by the US Department of Defense.

And for that reason, military astronauts make less money than civilian astronauts. For example, if you look at the salary of a US Air Force colonel who has 20 years in the service, their base salary per annum is about $138,000.

But if you’re looking at an Air Force Major who also has the same level of experience, they usually earn about $105,000 per annum.

Apart from the joy and glory of flying itself, civilian astronauts, who are employed with space agencies such as NASA, start at about $66,000 a year. But that number can go as high as $161,000 depending on many factors, like level of experience.

If the individual is an astronaut with an agency like SpaceX, well, that can go a lot higher depending on the mission the astronaut is willing to undertake. For instance, SpaceX Founder Elon Musk has said that he’d pay his astronauts about $500,000 for one trip to Mars.

So, whether you want to be a civilian astronaut or a military one, salary shouldn’t be much of a concern because that will be well taken care of. It also doesn’t matter if you’re working for a private entity or the government of the United States because it will be a rewarding career, financially speaking.

So, it’s more like a matter of who you want to align yourself with and what your individual goals are as an astronaut. Now that you get the answer to the question, “do astronauts get paid for life.”

Some of the very first astronauts who were chosen to go to space were, of course, ones who had the most skill and were highly trained. So, they were indeed given a generous salary.

Let’s also not forget that in the beginning, space travel endured a lot of failures which even led to lost lives.

In 1961, John F. Kennedy made the historic announcement that within the decade, the US was going to put a man on the moon. So, if we start there, the starting salary of a NASA astronaut in 1962 was about $8,000 to $12,000 a year. The differential was based on experience.

If you don’t think that was a lot, it’s time to remind you that this was twice the average wage for that time period. So, in today’s terms, the astronauts were getting about $100,000 a year. Seems fair now?

That’s not a surprise for the time because they were indeed looking for the best man for the job. Now, of course, salaries are a lot more than that. The test pilots on Mercury 7 were all paid somewhere between $8,330 to $12,770.

So, they were all well paid right for the time the US set its sight on outer space.

By 1969, when the decade was nearing an end, the US succeeded in putting men on the moon. It’s the mission we now know as Apollo 11. It shouldn’t be a surprise to learn at this point that astronauts were some of the highest-paid individuals in the world.

These explorers were paid about $17,000 a year, which is equal to about $100,000 in today’s monetary terms. What might feel like a scandalizing detail, though, is the fact that the astronauts on this mission, Neil Armstrong, Buzz Aldrin, and Michael Collins, did not get any life insurance or hazard pay.

It is said that that’s the reason they left autographs that are now referred to as “insurance covers”. It was so that the families to get something by selling those autographs. Those little signatures are not so little now as they are each worth more than $5,000.

At the end of the day, you could say that they might not have had back-ups the way you’d want the first men on the moon to have, but they were still paid quite well. And now that we know it to be “a giant leap for mankind” it seems that we can safely say all’s well that ends well.

When we think of a public agency, it’s obviously NASA. The work here is challenging as well as rewarding, no doubt. Some of the individuals who work here have unique minds and are responsible for some groundbreaking research. And for that, they’re paid quite well.

Astronauts who have at least a decade of experience can easily make six-figure earnings at NASA. Some of them go as high as 300k dollars a year. Today, there are perks and incentives to the job too. So, that’s another benefit.

If you go the private way, you are looking at options like SpaceX. If you’re looking just at salary, you don’t have to worry about it because they are willing to pay competitively.

Their idea is to attract the best of the talent out there so that they can break new ground and make a name for themselves (if not discover and advance mankind’s understanding of those unknown frontiers). Mars, of course, is what everyone is looking at today.

SpaceX offers a starting figure ranging from 120k to 200k. So, just money-wise, you won’t go wrong no matter your choice.

The bottom line is that astronauts, civilian and military, get paid quite well. Apart from base salary, astronauts also get a few perks and are compensated for certain things. Not only is there a competitive salary that is a great benefit of this job but there are plenty of incentives too.

This is to keep them on track and make sure that they have good health and a good work-life balance as well. These perks are meant to be incentives to keep them with whatever agency they are working for. We hope you’re clear on the question, “do astronauts get paid for life.”