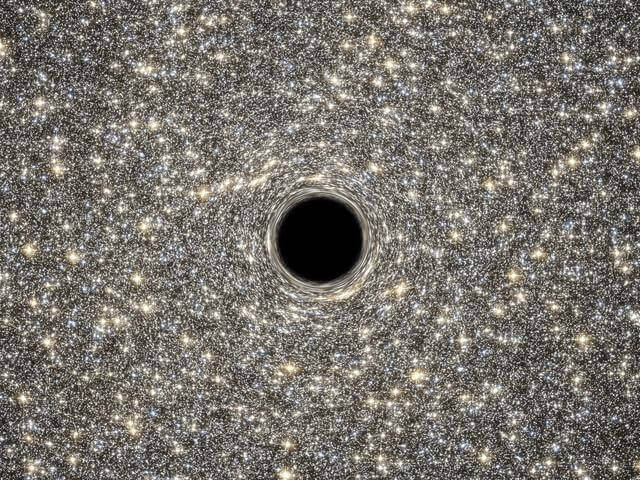 Space is a massive phenomenon with unique celestial bodies roaming about. One of the most controversial and, no doubt, terrifying celestial body that exists in space is a black hole. A black hole is often confused with a wormhole which is a separate spectacle. In this article, we will discuss the similarities and differences that link and set-apart black holes from wormholes, so sit tight!

What is a Black Hole?

A black hole is one of the most peculiar phenomena in space. Talked up by today’s pop culture, there are several theories that exist, describing the existence, function, and purpose of a black hole. Some suggest that it is a huge suction spectacle that devours stars and planets while others say that a black hole is an entry point into a parallel universe.

While science fiction is interesting to read and visualize, it is fairly important to grasp the scientific gist behind such a spectacular celestial object.

“A black hole is a region in space where the matter has condensed to such a high density that the surface gravity is so high that you cannot escape it”.

Black Hole – In a Layman’s Term

As described by Mr. Tyson, a humble explanation for a black hole is that it is a body in space that has a very high density. This high density creates an unfathomable field of gravity. This intense gravitational pull is so high that even light cannot escape from it.

What Happens If You Fell Into A Black Hole?

First of all, I would suggest that you prefer not to do that, however, even if you happen to fall into a black hole, you will not miss the tidal forces of gravity that would create a calamity. You will be stretched from head to toe until your body gives up and splits into two. Then those two parts will further stretch and split until you are reduced to atoms and gather at the center of the black hole.

Consider that the black hole is a fabric of the space-time continuum, warped back on itself and once you fall in, you’re not coming out of it. Not even if you travel at the speed of light.

How Is A Blackhole Created?

Throughout a supernova explosion, a huge star crumbles in on itself, creating a black hole. A huge gravitational cocoon is formed around the star because of its high density. This cocoon has a very high gravitational pull and it sucks everything that lies within its locality.

The event horizon is the name given to the external boundary of the black hole. It is considered to be the threshold point because if an object crosses the event horizon, it is subjected to an extreme pull. This pull makes it impossible for that object to escape this celestial abyss.

Albert Einstein theorized that the event horizon of a black hole can be seen because a black hole is not visible, as light cannot escape from it. This theory of Einstein has been proven correct by the recent photograph of the black hole that was taken by a culmination of massive telescopes fixed throughout the globe.

As the objects are subjected to crushing gravitational forces, they are reduced to atoms and accumulated at the center of the black hole. The center point of a black hole is super dense and is called a singularity. A singularity is considered to be the densest point in the entire galaxy.

Types of a Black Hole

A black hole occurs in almost every galaxy. Black holes exist in various sizes. These sizes depend upon the mode of formation by which the black hole is created. There are three main categories of black holes.

When a star collapses, it is recognized as a stellar black hole. They range in mass from a few solar masses to tens of thousands of solar masses. A hypernova outburst or a gamma-ray blast may be seen as a result of this event. Collapsars are another name for these black holes.

Mostly these black holes are formed by the merger of smaller black holes, for instance, the merging of two black holes with masses of 85 and 65 solar masses culminated in the gravitational wave signal GW190521, which was discovered on May 21st, 2019.

A galaxy’s core contains a supermassive black hole, which feeds on nearby stars and smaller black holes to become enormously vast. It is millions of times larger than the Sun.

What is a Wormhole?

Wormholes are perhaps one of the most mind-boggling concepts ever hypothesized. We have seen them in sci-fi films, and superhero comics, and have read about them in novels, as well as, in other media. Like a black hole, a wormhole is also encircled in controversy and several theories have been put forward by different echelons of scientists and researchers.

Wormhole – In a Layman’s Term

Consider a plain sheet of paper to be the fabric of time and space. Take a pencil and make two dots on it. One dot is X and the other one is Y. Imagine that traveling from point X to point Y takes millions of light-years. Now fold the sheet of paper so that the two points are parallel to each other and stab the pencil from X through Y. The pencil describes a wormhole.

In other words, a wormhole is a hypothesized phenomenon that explains the concepts of matter displacement, time travel, and the multiverse. In the earlier example, point X can be an entry point in time and space where the wormhole is created while point Y can be the exit point in another time and space. One can enter point X and exit via point Y and the distance between the two points depends on how much the fabric of the space-time continuum is warped.

Some astronomers believe that the universe is not a linear phenomenon but is curved and after a certain distance, one universe becomes parallel to another. This distance is so great that it cannot be achieved even if one can travel at the speed of light. Therefore, in order to travel from one universe to another, wormholes can be used.

Wormholes, though an intriguing phenomenon, have not been confirmed. Mathematically speaking, the equations that support the existence of wormholes also suggest that these wormholes are highly unstable. Even if someone creates a wormhole and tries to travel through it, due to the unpredictability and instability, the wormhole can collapse on that person or the object.

Unfortunately, the majority of the scientists believe that these wormholes that we fantasize about, do not exist in reality. Even if they do, so far, no clue or evidence has been found reaffirming their presence.

According to Einstein, wormholes are the solutions to his field equations for gravity that act as tunnels connecting space-time. If Einstein’s prediction regarding the event horizon became a reality with today’s technology, who knows maybe with tomorrow’s technology scientists can confirm the existence of wormholes.

What is the difference between black holes and wormholes? Since light cannot escape the black holes, scientists are not sure what the singularity, looks like. There are many scientists who once believed that the black holes since they suck everything, are an entry point into space.

Moreover, they believed that black holes have a counterpart in another part of the universe, very far away. This counterpart is an exit point, known as a white hole. Everything that enters or is sucked into the black hole, exits through the white hole at another point in the reality of the space-time continuum.

They suggested that a black hole and white hole are connected via a tunnel that leads the objects from one point to the other, these tunnels, they believed, are in fact the wormholes that we have been searching for.

Though this theory sounds more like a sci-fi concept, the black holes are still a huge mystery. With the recent photograph of the black hole, it is more viable to trust that the black hole does not lead to anything but an intensely dense singularity. This singularity becomes denser and denser as objects fell within the event horizon, reinforcing its gravitational pull.